I was slightly apprehensive about the first of four half marathons planned within the next 5 weeks. For the past 3 days I have been struggling with planter fasciitis affecting my left foot. This made me a tad nervous about this event, as it was not entirely healed and I did not want to sustain any further damage.

I arrived at Kew Gardens where the race began, just after 8am, ready for a 9am start. Just before arriving I realised that I had left my timing chip to attach to my shoe at home *slaps forehead*. Damn! I went over to the race information tent, where they kindly reissued me with a new race number with no fuss. I was asked my expected finish time, to which I replied “between 1:30 and 1:35”. With my foot not feeling 100%, this was a stretch! I was even more pleased to receive a new number “23” (replacing my current number, 636). My lowest race number, to-date!

Shortly before 9am, I was in the start pen, mobilising my joints. I did not engage in a significant warm-up, as I was not planning for any PBs, and just wanted to complete the event in a fairly respectable 1:35. I crossed the start line around 4 seconds after gun time, and was soon pounding away! I tried not to think about my foot too much, and just concentrated on my running form and enjoying the beautiful scenery. This was arguably one of the most scenic and natural routes I had run, and made a lovely change from road races. The route was a combination of park pathways, grass, tow-path along the river Thames and a few roads in Richmond. Overall, a beautiful route!

Around 8km, I felt a sharp piercing pinch on my chest. At first I thought a safety pin had just stabbed me after coming loose from my bib. I looked down and saw a wasp stuck to my running vest! I blew it off and looked at my chest, which was now throbbing and turning red! Having never been stung before, I didn’t know what to expect. Should I stop? Find a Marshall? Walk for a bit? But I didn’t. Instead, I just continued, even picking up the pace a little! I was doing too well and having a great time to let this ruin my run!

I continued at a strong pace, and noted my watch around 16km (10 miles). The run time was around 1 hour and 7 minutes. Around 2 minutes better than my previous best for 10 miles. I knew a sub-1:30 half marathon was up for grabs, as long as I could maintain this pace. The course was flat, too, which really helped. The only slight niggle was the uneven tow-path.

I continued at my pace and after 19.5km began to increase my speed. Entering Richmond Park I could hear the crowds. I must not be far now, I thought. Once I saw the finish line, I began to make a dash. My sprint finish really got some nice cheers and support from the fantastic spectators, which spurred me on even more! I managed to cross the finish line and got a chip time of 1:27:32, which was 9 minutes 59 seconds better than Run Hackney which I did just 3 months ago!

The medal was really something special and all finishers also received a Richmond Running Festival Nike running T-shirt, too.

I really like events which include a high quality Tech T-shirt to remind me of the event. I got myself checked out by an ambulance at the race village, who gave me some hydrocortisone cream. Apart from the unfortunate wasp sting, a smashing run and great day.

I have signed up for the London Duathlon next year, which takes place on 20th September. I have a feeling that this may clash with next year’s Richmond Running Festival. If not, will definitely be back next year for more! 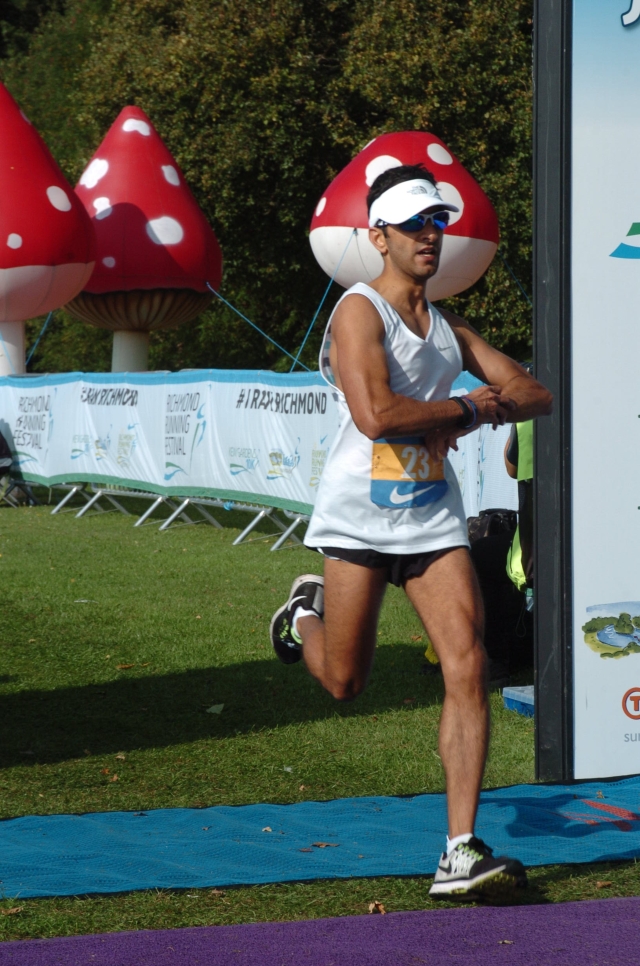 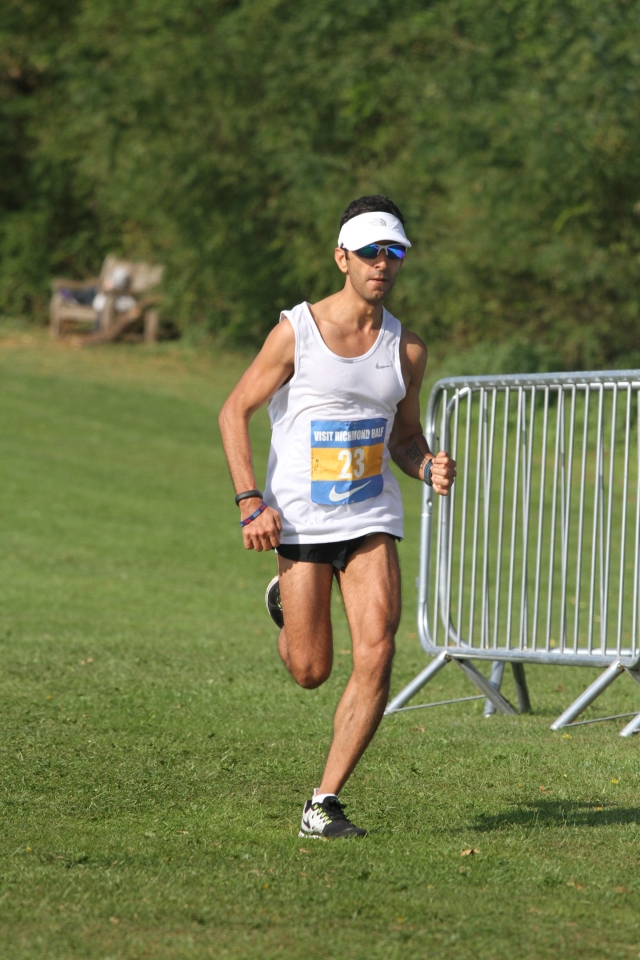 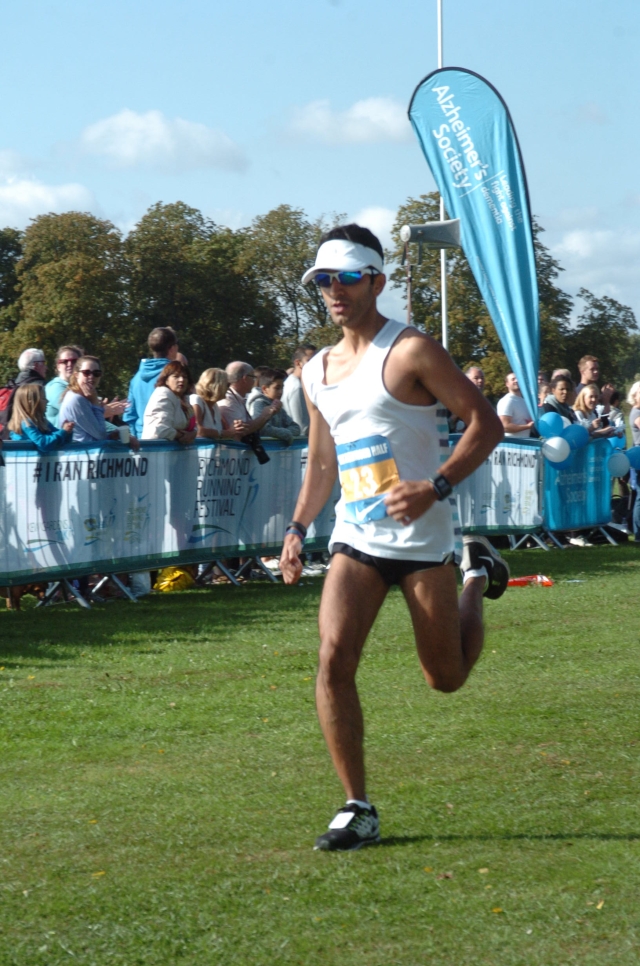 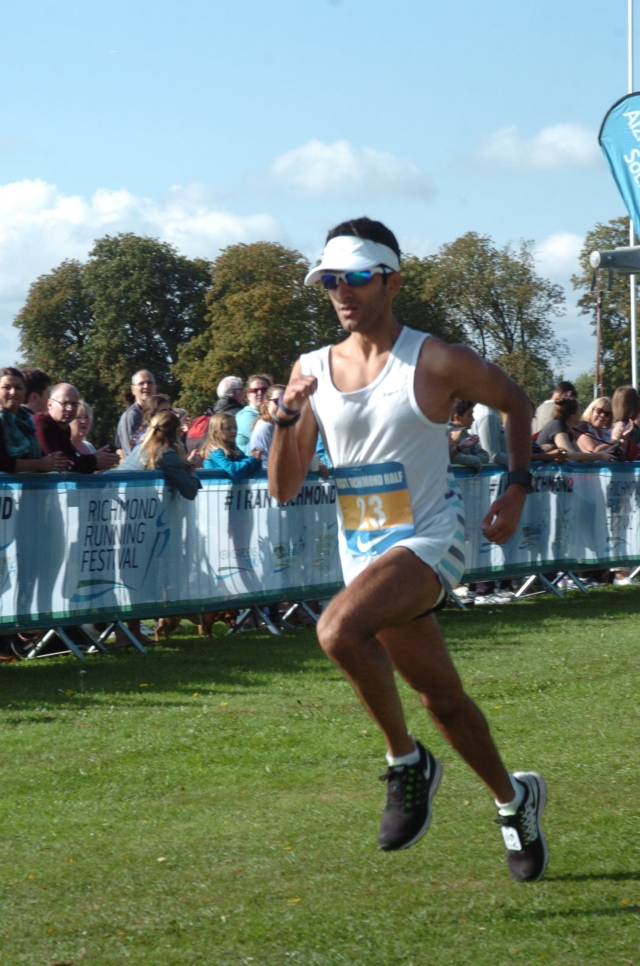 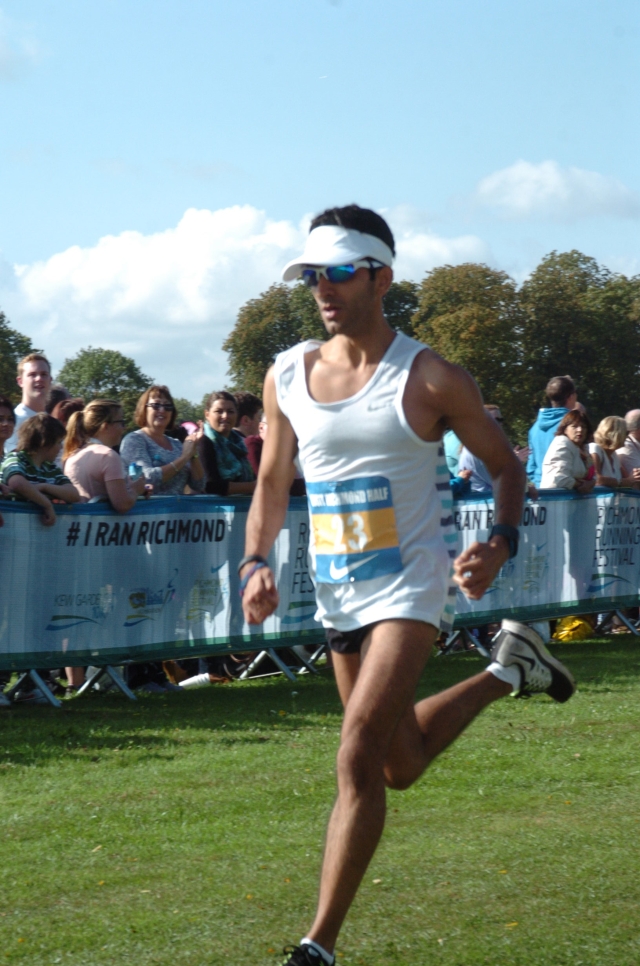