So yesterday I started a new drug called adalimumab (Humira). I’ve been struggling to induce remission with my ulcerative colitis since 2015, with the past few months being particularly turbulent. I was put on another biological drug last January (2017) called vedlizumab, with infusions every 8 weeks. Unfortunately, this failed and being on a high dose of steroids (prednisolone) for some time now, my GI suggested moving treatment to Humira.

As you may know from previous blog posts, this has had a detrimental effect on my running. I struggled with the Royal Parks Half in October, and things are not much better now. Being back on 40mg of prednisolone and the overall nature of the disease has left me feeling exhausted, but the motivation to get out there and run is always present. Okay, so my pace has been hampered- maintaining 8-minute miles (slower than my marathon pace) feels very tough right now, even for a 5k, so I’m hoping that the Humira works wonders… and quickly! So, what is this drug all about?

What is Humira?
Adalimumab, also known by its brand name Humira, is a humanised mono-clonal antibody that is administered subcutaneously. It acts by targeting a cell signalling molecule called Tumour Necrosis Factor-alpha (TNF-a), and as such, is referred to as anti-TNF-a treatment. TNF-a is an inflammatory cytokine that is produced during inflammatory conditions such as ulcerative colitis. Although it has a normal beneficial function within the immune system, over production in IBD patients is a contributory factor to disease pathogenesis. Simply put, this man-made antibody targets and attaches to TNF-a, thus preventing it from causing inflammation. Another alternative biological TNF-a treatment is infliximab, but this must be administered intravenously in hospital every 4 weeks, so I decided to try Humira first, thus giving me more independence. Side effects range from the common and mild (fatigue, headaches) to the uncommon and severe (cancer, neuropathy, heart failure). It’s good practice to be aware and informed, but I’d rather not dwell on these too much!

Getting started
Now this is pretty interesting. St. Marks hospital referred me to start treatment, which is entirely handled by a company called ‘Healthcare at Home’. They contacted me a few weeks after my appointment in December (2017) and arranged to send the adalimumab to my home. On delivery, the drug needs to be stored in the refrigerator, and you get quite a lot of information in the form of a welcome pack, along with a sharps bin for the safe disposal of the syringes. A nurse then contacted me to come to my home to show me how to self-inject, as well as complete a lengthy amount of paper work and formalities. This was arranged for the same day I took delivery, so I could get started immediately.

The needle itself is contained within a syringe pen, and the patient doesn’t actually see the needle (unless you take a peek inside from the bottom). I watched a few videos of people self-injecting and read a few forum posts beforehand. But needn’t had worried. The entire system was very easy, simple and pretty much pain-free. I had to inject four 40mg doses into my legs (2 on each side). This is to be followed up by a further two doses in 2 weeks time, then a single dose every 2 weeks. The syringe can be injected into the abdomen, but I preferred to do this in my leg. At £400 per injection, this stuff is not cheap. And knowing that I had just self-injected £1600 worth of medication within a few minutes was a surreal feeling! 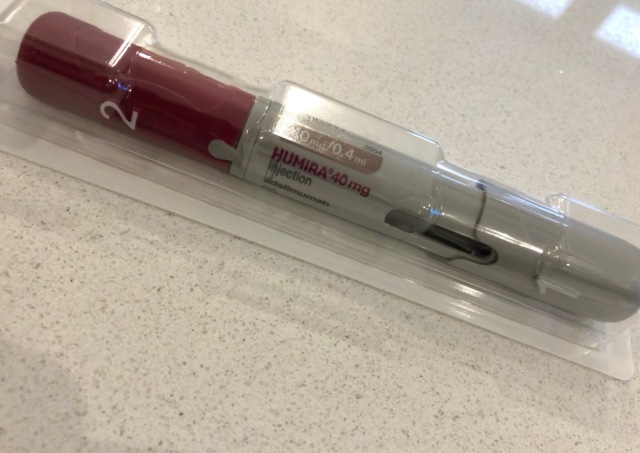 How does it feel?
Post-injection, I felt pretty wiped out and tired for the rest of the evening. My running has already been hampered and I’ve been pretty tired due to a high dose of prednsiolone, but the Humira adds to this. I did manage to head out for a 6.5 mile run the following day (today actually!) and felt ‘okay’ for the first couple of miles before becoming rather fatigued. The pace was slower than usual, too. But in all honesty, I have become used to slower runs as I focus on getting better and enjoying other subtleties in life.

Forward thinking
It’s still early days, so I will have to see how my body copes with this new treatment. I have a half marathon ‘The Big Half’ coming up in just under 5 weeks. With things the way they are, this seems like a far-fetched goal. Sure I could get through it, but not in the time I would consider to be acceptable for myself. Not writing it off completely, I am still hoping that there is a considerable improvement over the next few weeks that allows me to be in shape to get at least a sub 1:30. Stay tuned and stay strong! 🏃🏽✌🏼

6 thoughts on “Running on adalimumab (Humira)- First dose and experiences”