After pacing the Royal Parks Half Marathon last year in 2016, I was absolutely delighted to obtain a ballot place for this year’s event. This was the first time that I had been successful in securing a place to run, and having paced it last year, knew how electric the atmosphere is. This is probably the second best race for crowd support in London (if not the UK), after the London Marathon, in my experience. This was one of my A-list events for 2017, and I was really looking forward to it. My goal back when I first found out I had a place was to be race-ready for a PB, so anything better than 1:23:14. Unfortunately, I had a minor ulcerative colitis flare which started in July. Things were manageable, and I completed Ride London and a couple of smaller road races in August. Things got progressively worse, and I just managed to do the London Duathlon in September. After this (although probably not related to any events), the colitis got very much out of hand. Being in and out of hospital over the past few weeks and on 40mg of prednisolone, it has been a testing time. I was in hospital just last Sunday (1st October), and based on my symptoms and disease severity, convinced that running Royal Parks in just 7 days would be nigh impossible.

Fortunately, the prednisolone kicked in around Wednesday, and I noticed some improvement. I really didn’t want to give-up. Okay, I know I hadn’t trained for this, and running mileage has been very low/slow over the past few weeks, having not run more than 5k. Also being anaemic, and Doctors recommending an iron transfusion, I didn’t want to quit. How could I? Running is one of the reasons for my existence. Perhaps a strong statement, but I cannot think of any other way to put it. I made my mind up. I was going to be on that start-line on the 8th of October; no matter what!

Roll on to Sunday morning. I woke up at 5:55am, and had some Rice Krispies (easy enough to digest), before being dropped at Woodford station to catch the 7:30 train with Sania. We arrived at Knightsbridge at around 8:20am. It was packed! Exiting the station took a while, but we finally made it out. I needed to use the loo as soon as we got there. A desperate situation! The queues were really long, and I panicked. I saw a Royal Parks staff member, and reluctantly explained that I have a medical condition and needed to use the toilet immediately, and if there were any facilities. She ushered me to the front of the queue, and explained this to a runner who was waiting her turn to be next or the loo. Her reaction was hilarious! She eyed me up and down a couple of times, raised her eyebrows, and unenthusiastically said, “okay”. Once the RP staff member left, I tried to explain the situation to her. It transpired that she works for a GPs surgery, and better understood the situation once I clarified it (I hope!). So with that out of the way, I got myself into the start pen just before 9:00am. I did a few stretches and a brief warm-up. Nothing like my normal race-prep, though. I funnelled into the orange wave, and set off a few seconds after gun-time. I tried to keep the pace conservative, but as with any ‘race’, the adrenaline and crowd support make the pace feel a lot slower than it actually is. The first kilometre took 4:23 and the second 4:15, before finally easing into the 4:20s and then 4:30s. This was going to be the pace now, I thought. I honestly didn’t have a time in mind. I knew 1:30 was not going to happen today. Maybe 1:35? Has to be under 1:40? Or even 1:45 if I felt bad? Who knows.

The first 5k was done in 22:02, and all things considered, I felt okay up until this point. Faster than I would have liked, but I knew I would be slowing down later. After the 5k, though, my tummy really began to hurt. I remember struggling up The Strand, and seeing Jamie Xavier call my name out form the other side of the road really helped. What a top man; thanks, Jamie! By the time I reached 8 kilometres, I was seriously thinking of getting back to Hyde Park, and stopping at 10k with my first DNF. That was my gut feeling (no pun intended!). I gave it my best shot. But I pushed on, and the pain in my tummy became a dull, bearable sensation. I was slightly concerned about how I’d be after the race, but I had come so far now, and it was just over 10k to go!

I felt better once I entered Hyde Park again at the 10k point, as the crowds here really lifted my spirits. This is truly where the Royal Parks Half Marathon begins! I continued on, despite the pace slightly slipping between 10-16k, becoming an average of 4:40/km. By the time I reached 10 miles, I felt my left gastrocnemius begin to misfire. I knew a cramp was on its way, which never happens in a half marathon. But it was no surprise, considering the lack of any training and persistent dehydration/malnourishment over the past few weeks.

I dropped the pace now to just under 5:00/km, and saw that I could still be on for a sub 1:40. Possibly, and hopefully. I continued on, and finally saw the 12-mile marker. Feeling that the end was near, I was relieved. But my quad now was really cramping up, and I was beginning to hobble, as opposed to run, beacuse I couldn’t fully bend my knee. Plenty of runners were now overtaking me, but it was okay. This was my own race, and I needed to prove something to myself alone. The final kilometre was here now, but each step I took became progressively more difficult. I was almost limping by this point, not even able to bend my left leg to run. Yes, it was frustrating, but I didn’t care. I could see the finish line in sight now. With 800m to go, I saw 1:36:30 on my watch. Yes, I could do it! Then at 400m I saw I still had over 2 minutes to get that sub 1:40. I finally made it, limping across the finish line in some sort of strange crippled running style. 1:39:38. A far cry from my usual times and sprint finishes, but strangely enough, I felt more accomplished today than ever before. Now Sania normally makes a video of me finishing, but today she only made half and then stopped, as she said it was to upsetting to watch me cross the finish line this way. I promised her I’d make it up to her in my next race! 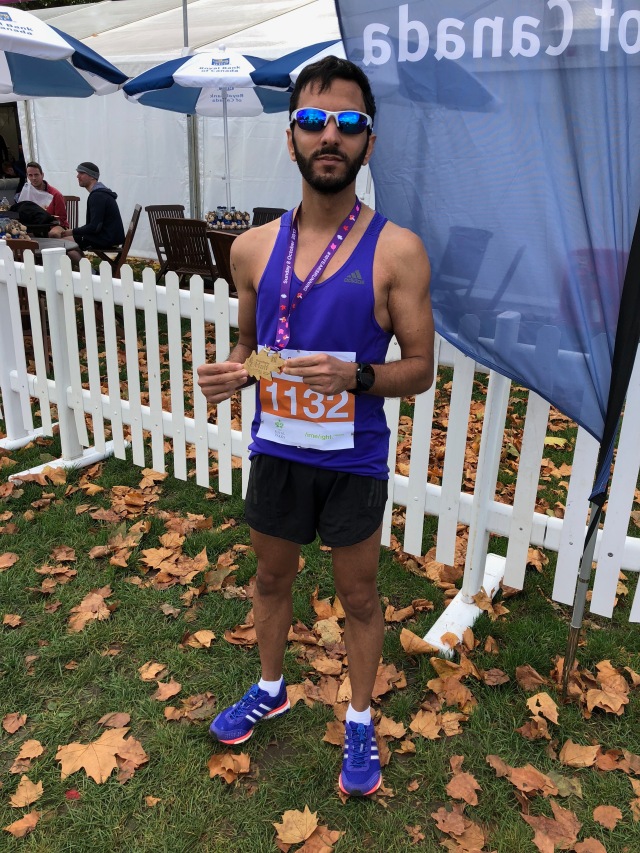 I pulled over to the side and my legs immediately seized up. I couldn’t walk for a couple of minutes as my muscles tightened hard. This is exactly why I didn’t stop in the race, because I knew I wouldn’t be able to start-up again! I limped down, collected my leafy medal, a banana, and empty bag to collect goodies from the race village, before finally meeting up with Sania. I changed into some fresh clothes and we finally exited Hyde Park; there were so many runners and spectators! We then met Mark and Pete at Starbucks in Knightsbridge for a coffee. Well deserved! They were also running today, competing in the inaugural Shoreditch 10k, with Pete netting a cheeky PB! It looked like an interesting event, perhaps one to consider for next year should I not be successful in the Royal Parks ballot again.

In summary, this was probably one of my hardest half marathon races. Not only physically, but mentally. Having run sub 1:25 many times for this distance, I can honestly say that this was the most physically demanding. I know that this won’t be permanent, and I’m not feeling sorry for myself. I think I did ‘okay’, and look forward to getting back into PB shape again. I don’t have any further races planned this year, although will be looking do do a 10k run next month, along with a few Parkruns, to gently ease back into things. But for now, I am just focussing on regaining my strength and health, enjoying the subtle things in life with my family. Until the next race… 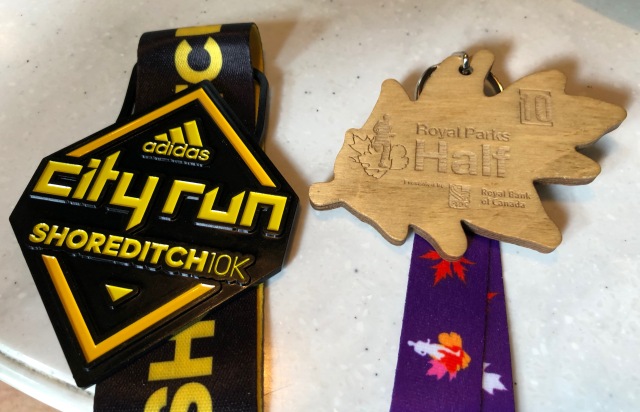