The Wiggle London Duathlon is the worlds biggest duathlon, taking place in the scenic setting of Richmond Park. There are three main distances, each consisting of a run, followed by a bike ride, and a final run. I signed up for the event way back in September 2014, opting for the standard duathlon distance of 10-44-5 (10km run, 44km bike, 5km run).

For two main reasons, I decided to drop down to the half distance of a 5km run, 22km bike ride and 5km run. Firstly, I have been struggling with a glute injury, meaning I have not been doing anywhere near as much running as I would have liked to. And second, the duathlon begins at 9am, and getting from my home in Essex to the start line would be very difficult (as I was planning to use public transport). Both factors played an equal part in my final decision.

I arrived at Richmond station at 10am, thinking I was well in time for the 11:30am start. I did not anticipate that the walk from the train station to the race village was going to take a while! After some navigation and cycling, I finally arrived at the race village by 10:50. I still had to swap my race number (as I was now doing the half), rack my bike in the transition zone, go to the loo and warm-up. Fortunately, I managed to do all this in time, and was in the start area ready to go by 11:30.

All participants (athletes?) were clustered into waves, based on a first-come, first-serve basis (i.e. whoever decided to get in line first). A group of participants would be led to a tent in which final instructions were provided by an automated speaker, and we could finally get underway after a countdown of four beeps. This was almost akin to queueing for a theme park ride. It was unlike a normal road race, and the waves were not based on finish times. In fact, the entire event was unlike any other I had done before. With participants doing either the ultra distance, standard event, half or relay, it was difficult to determine whether someone was lapping you on fresh legs, had just finished their long bike ride, were at the end of their race or had started in a wave much ahead/behind you. For this reason, gun time seemed irrelevant more than ever, and it truly was an event of you against the clock. I finally got my race started at around ~11:45.

I managed to complete the first leg of a 5km run in 21:17, at a relaxed pace. I then entered transition (T1) and after putting on my helmet and gloves, which actually took few minutes (2min 42sec, to be precise), I was on my saddle and taking in the scenic views of Richmond Park. I really enjoyed most of my ride. The weather turned out to be perfect and sunny (but not too warm). Seeing the scenery and a few deer along the route also made it worthwhile. I stopped briefly for a banana and water along the ride, too. 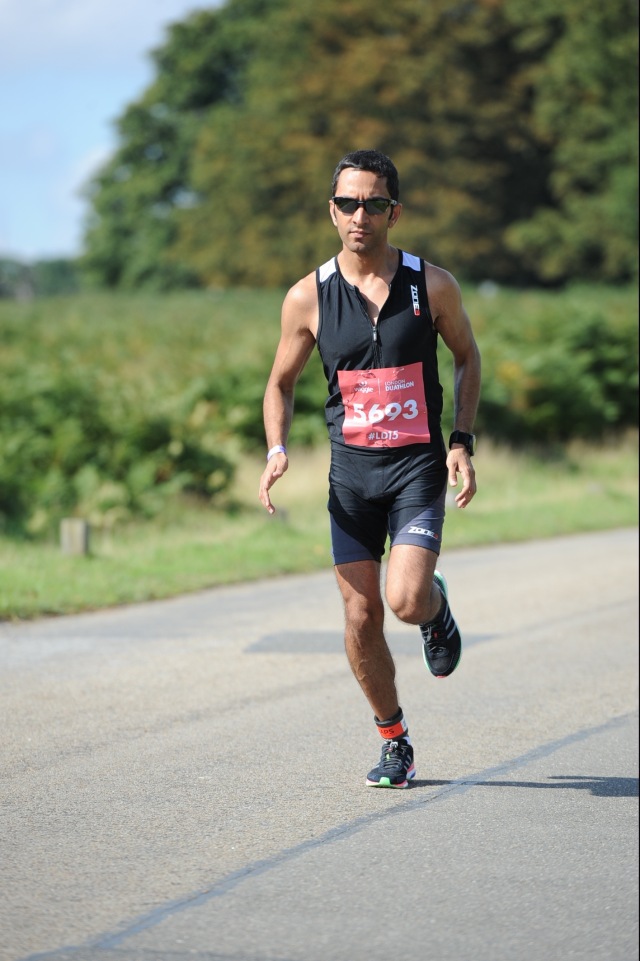 After the 22km ride, which was completed in 52:11, I entered transition (T2), had a brief stretch out of my legs, and again after a further 1min 19sec was back out for the final 5km run. I struggled with a few cramps during this final run, which I can only pin down to lack of brick training. It was unfortunate as I had plenty of energy, alas running with spasming cramps is near impossible. The 5km took a painfully slow 27:07 to complete, as I stopped a few times to massage my quads.

Once the finish was in sight I made a dash, and felt a little wobbly on my legs, but was happy to blast through the finish line. Okay, so my time for the entire distance, including transitions was 1:47:54, somewhat slower than I would have liked it to be. I know I will beat this time next year, and for my first duathlon, it was a fantastic experience none-the-less. 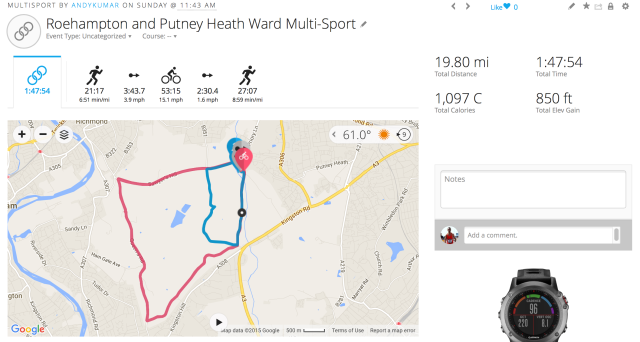 Post-event, all finishers got a nice Tech T-shirt (available in multiple sizes) and I treated myself to a nice London Duathlon RUN-BIKE-RUN hooded top for the winter months. It was also nice to finally meet Julian Porter, a fellow running and cycling buddy who also did the half duathlon, and has a very interesting and inspirational story to tell on his own blog: http://www.julesporter.com.

Conclusively, I would highly recommend this event. It was well organised and the transitions were not as daunting or complicated as I thought. Lime light sports did a good job here, but unfortunately, as a company they do lack customer care. In the lead up to the event I would need to send multiple emails/messages or wait for days to get a response. Even at the time of writing this blog post, my official results are still not up, which is a little disappointing. 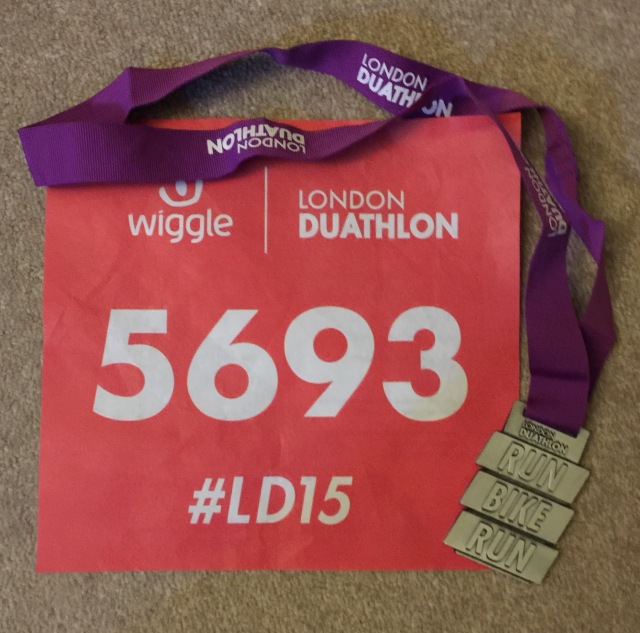