The half marathon is probably my favourite racing distance. It is long enough to feel like a challenge, yet short enough to do without the immense preparation demanded from the marathon distance. There is a also a significant sense of achievement after running 13.1 miles at a hard pace. Checking over my Strava record, I can see that a half marathon took me 1hr 45 minutes last year this time. Fast forward to October of last year, I achieved my currently held PB of 1:23:39; a feat I am most content with.

I raced a half marathon 2 weeks ago at the adidas Silverstone event, falling short of a PB by one minute. Given the conditions on the day, I was not disheartened by my performance. Yesterday, I took part in the inaugural Hampton Court Palace half marathon. The race started in the Hampton Court Palace grounds, and took runners through scenic views and a mixed combination of grass, towpath, gravel walkways and road. The course was generally flat, with some very mild undulations, and may have carried PB potential. I was planning to race fairly hard, but not too concerned with breaking a PB (although was not ruling the possibility out!).

With the clocks going forward by one hour and reverting to British Summer Time (BST), I was technically on-board a train from Woodford station at 5:57am! (although 6:57 adjusted). I travelled up to Waterloo, before boarding a train to Hampton Court, arriving at the palace grounds just after 8:30am. This left me with just enough time for a quick toilet break, change and warm-up. By 8:55, I was ready to race and in the starting pen. There were some 3000 runners signed up for this event, with probably just under this amount here today (as some had inevitably dropped out or were injured). 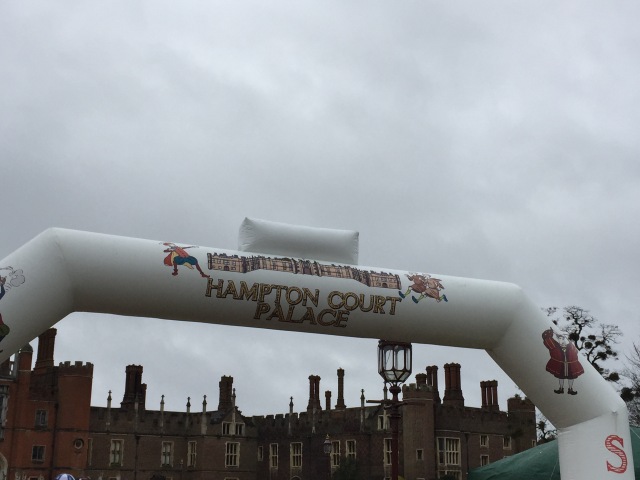 I went off at a fairly solid pace, and felt quite good. Running along a towpath with the River Thames on my right hand side was a delight. There were not many runners up near the front, and after we had spread out, I was running most of the route alone, on occasions with a 50 metre gap between me and runners both infront and behind me. Marshalls along the route were mostly encouraging and supportive, providing clear directions.

The course was definitely varied, with the vast majority taking place on towpath and fields. It was a very windy day, with some rainy patches, meaning harsh conditions to contend with. At specific parts of the run the wind was blowing hard in my direction, sapping my energy and reducing my pace from a desired sub 4:00/km to 4:10-15/km. The course covered 2 similar laps, and at the half-way point, we got to run through the palace grounds. Crowds here were very encouraging and I really enjoyed running through the palace gardens. A special thanks to the crowds and marshals who braved the cold to support us! Coming out of the grounds meant running up a stoney patch, which I personally found a little tricky, as I have never run on stones before.

It was again very windy during the second lap, again with some drizzle from above. I continued to run through this, although again my pace took a battering. I continued to battle through, eventually winding up near the palace grounds again. Seeing the mile markers was great, although some of them were up to 400m out, notably at miles 11 and 12. I particularly enjoyed running on the grass along and back the Long Water lake in the grounds of Hampton Court Park at mile 12.

During the final 500m, I began to pick up my pace, eventually finishing strong in 1:25:47 and 17th position overall. The finish was along a bend, which was a little odd, but not a particular issue for me. It was nice to hear the announcer mention my name as I crossed the finish line, too. I collected my medal and T-shirt, before making my way back to meet my family who had braved the cold to watch me run today.

All-in-all, a very scenic run with a great route. Unfortunately, the weather was not on our side today. I am running the Brighton marathon on the 12th of April, and have been advised that running along the sea front may also be windy, so perhaps todays run will provide a taste of things to come!?