I have owned my original Apple Watch since it launched back in 2015. I was immensely excited, and wore it almost every-day over that summer. However, I continually found myself turning to my fenix 3, and my love affair with the Apple Watch soon started to dwindle. Sure I continued to use it, but probably not as much as I had initially anticipated. It was a nice enough watch, but I often found it slow and lacking in features. The fenix 3 really was my watch of choice for the vast majority of 2016. In April of 2017, I then upgraded to the forerunner 935. And for the past 6 months, I’ve been using the the 935 as both my daily and sports watch, wearing it pretty much 24/7. At this point, my Apple Watch had not been switched on in months. After watching the WWDC Keynote by Apple in June 2017, I took notice of how far along the Apple Watch had come, and with the promise of Watch OS4 on the horizon, began to pay interest once more. Roll onto the September Keynote, Apple finally unveiled the Apple Watch Series 3. Coming in 2 flavours, both LTE or GPS, I knew that the Apple Watch had not only progressed in terms of OS, but hardware, too.

After some contemplation, I ordered the Apple Watch Series 3 on the 26th of September, taking delivery for it the following day. My model of choice was the 42mm Space Grey aluminium with a grey sport band. I opted for the non-LTE model, as the LTE version is only available with EE in the UK. I may have been tempted to fork out for LTE, but there still seem to be a few technical kinks to iron out, stock issues as well as my mobile being with O2. Perhaps sometime in the future then for LTE. But for now, even GPS is a huge incentive over the launch Apple Watch. So, was it worht the upgrade?

FIRST IMPRESSIONS / UNBOXING
Unboxing the Apple Watch was a pleasurable experience, as always. The Watch does not ship in a polycarbonate hard case like my launch model, which took a little away from the premium feel. Here is a quick video of the unboxing.

So once up and running, I had a quick play and speeds seemed to actually be comparable with my original Apple Watch. However, everything was definitely a lot smoother. Opening apps is where the series 3 really excelled. From a purely aesthetic perspective, both watts look identical, and improvements are definitely under the hood. The biggest incentives for me were the speed bump, built-in GPS and water resistance. Here is a complete breakdown of the main differences. 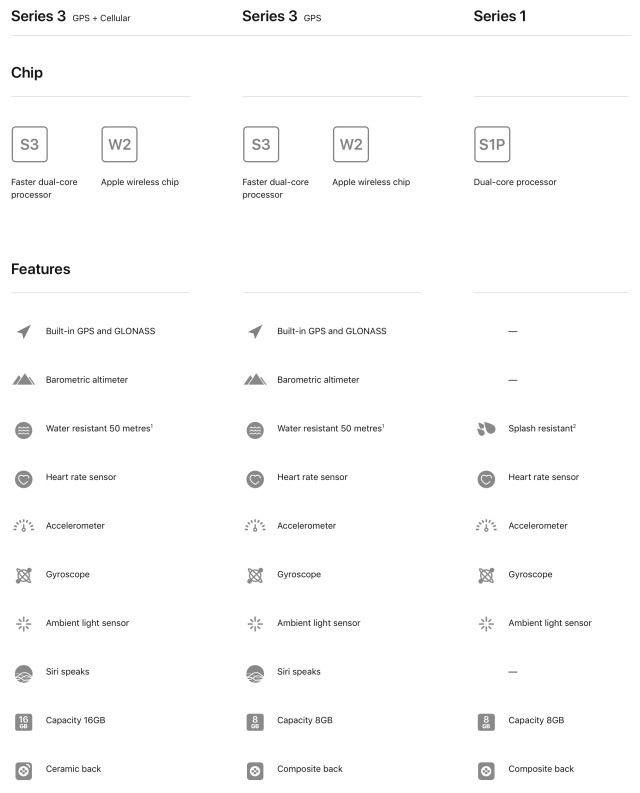 WATCH STRAPS
I also purchased a few new straps to go with my new Apple Watch. There are now many more styles and colours to choose from. The silicone sports band is definitely a winner, and my band of choice. The new sports loop is very light and comfortable, however, I have smaller than average wrists, and found that even on the tightest setting, the strap was slightly loose. Definitely wearable, but I’d have much preferred it to be a notch tighter. The woven nylon band is absolutely incredible, though. Light-weight, well made and just as comfortable as the sports band. Probably not a band I would sleep in, but a firm choice as my casual day-to-day band.

MY DAY-TO-DAY WATCH?
I have now had the Series 3 for one week, and have been using it every day since then. In short, it is brilliant. Here are some of the features I have found to be most compelling over the original Apple Watch. I know a few of these have been available for a while now, but only just returning to using the Apple Watch, I felt they were significant enough to include.

-Watch OS4. Arguably, the biggest overhaul. The new OS makes the Apple Watch much more intuitive to navigate and use. Easily selecting options from the dock, using Apple Pay and changing Watch faces is a breeze now.

-Apple Pay. This is the first time I have started to use Apple Pay on my watch. Double-clicking the dock button brings up the option, and I cannot believe I had been missing out on this. I’ve only used in a handful of times, but it has been incredibly convenient in comparison to pulling my phone out to pay.

-Siri voiceover. Now Siri can audibly respond from the Apple Watch. Previously, there would just be a typed response.

-Faster to respond to messages.

-Water-resistant to 50m. The original Apple Watch was ‘splash proof’ and I had no problems washing my hands with it. I probably won’t be taking a swim or shower with it, but it is good to know that the option is there.

-Much improved battery life. I used to get barely a day of battery life with my original Apple Watch, and with users with users reporting an even bigger drain since upgrading to Watch OS4. The Series 3 easily gets me through the day. I could potentially stretch it to almost 2 days with my use. I charge mine every evening, and still have just over 50% when I do so.

-GPS capabilities. This is something that is useful for maps, which are much faster now, too. It also means that the Apple Watch can be used for sporting activities without tethering to your iPhone, which brings me to my next point below.

FITNESS ACTIVITIES
This is where the Apple Watch falls short, at least for me. There is a lot I could mention about the fitness capabilities of this watch, but I will keep things short and simple. I am an avid runner, and despite the advancement of the Apple Watches fitness capabilities, can no way compete with a dedicated sports watch like the Forerunner 935 or fenix 5. I have typically become accustomed to analysing my workout data, taking into consideration important metrics such as cadence, ground contact time and vertical oscillation (to name a few). The Apple Watch simply lacks the hardware and functionality to cater for this. And that is probably fine, as the majority of people using the Apple Watch as a fitness device may not use such metrics. In fact, I know a lot of very good runners who don’t.

As a basic fitness tracker, I would still prefer my Forerunner 935, too. But as I wear the Apple Watch as my daily watch, I am now heavily reliant on the Health Kit app to track my steps, etc. In all honesty, I only check such measurements for mere curiosity, so the sketchy nature of the home Kit app does not seem to bother me too much. Seeing me reach my daily ‘fitness goals’ is not much of a personal encouragement, although I do appreciate the flashy animations when they do show up!

CONCLUSIONS
So I’ve rambled on a bit here, but I think that the Series 3 is (conclusively) a HUGE upgrade. It has definitely got me back into the Apple Watch camp, and arguably the product it should have been from the beginning. But the incremental advancements with each generation is typical of Apple. It has, however, made me very excited about the future of the product line-up.

2 thoughts on “Apple Watch series 3 – Worth the upgrade?”