The Pride 10k, now it its 13th year, takes place in Victoria Park (Tower Hamlets) and is organised by London Frontrunners. This is an inclusive running club for members of the LGBT community, although they welcome all runners into their club. The race has a reputation for being ‘fast and flat’, which encouraged me to sign-up. It was my aim to complete the course in under 40 minutes and use this as a training race to help prepare for the ELVIS Barking Road Runner 5k on 29th August, where I hope to best my 5k time from ELVIS 3 (18:31). 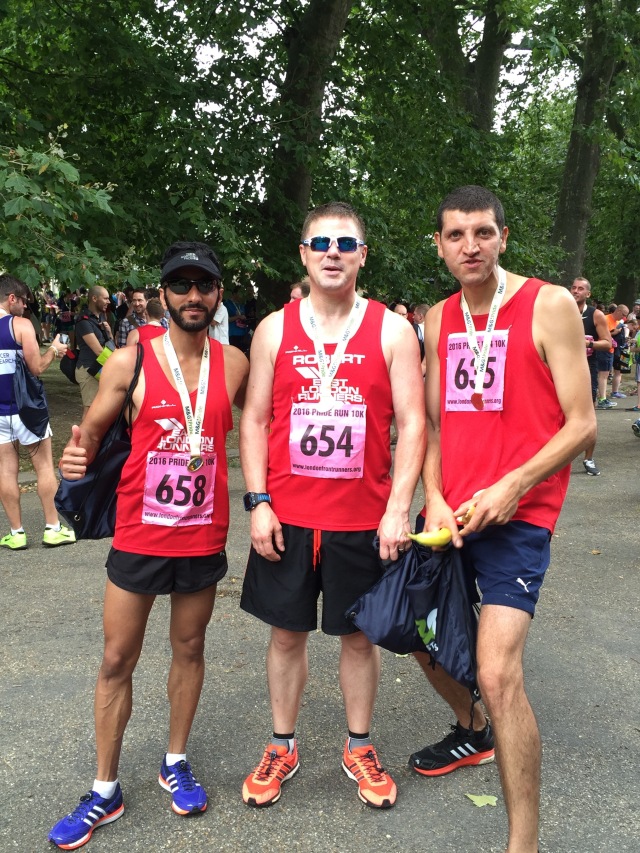 The 11am start meant I had a little more time in bed, and a more relaxed sleep. I got the train from Chigwell station, just after 9am. The journey was not too long to Hackney Wick, arriving just before 10am. Alighting from the London overground, I met Robert Rayworth. We made our way over to Victoria Park. There were many runners heading that way, so this saved some time as we simply followed them. Arriving at the park we met a few other ELRs including Jamie, Kelly and Finley Xavier. Robert and I then briefly warmed-up by taking a light jog around the park. I also met Jonathan Wooldridge briefly at the urinals (no judgement please!). We then made our way to the start-line. We bumped into Patrick Brown on the start-line, too. After wishing everyone good luck, we waited for the countdown and were soon off!

I tried not to get carried away, and took it easy. I saw my pace creep up, and I immediately brought down my strides. I always find the first kilometre very easy, probably due to the adrenaline rush and excitement, but I didn’t want to do that today. Bringing my pace back down, I finished the first km in 3:48, still a little faster than my plan. I felt very comfortable throughout the entire 10k, had plenty of energy and didn’t reach any points where I felt tired. I was really having a great time, even jumping up as I was running to touch some leaves on the trees, truly full of energy! Each stride was bouncy and the pace was sustainable. This felt great, particularly after a disappointing performance at the Great Newham London run (40:50), which I still put down to lack of drive and hot weather on the day! The course today was definitely fast and flat, and had a fantastic atmosphere and crowd support. Weather conditions were also perfect, bar the occasional headwind. I saw Spencer Evans and Alex Bee on the course around the 2km mark, and stayed with them for a while. I stopped to take a cup of water just after the 4km mark, and they pushed on ahead. This probably cost me a few seconds, as I cannot run and drink from paper cups, but I was ahead of my race plan time, and was not overly concerned to run alone.

By the time I reached 9km, I still had plenty in the tank, so I decided to push harder for the final kilometre (done in 3:40) and finish strong. I almost missed the finish line, despite seeing it in the distance, and had to brake hard and change direction to avoid bumping into one of the marshals! This again probably cost me a few seconds (the comedy value was probably worth it, though!), but it wasn’t a particular issue as I raced to the finish line with final time of 39:04. I even managed a negative split, which I believe is a first in a race for me, so also quite pleased with that. The first 5k was done in 19:38, and the second 5k in 19:26. Fantastic! 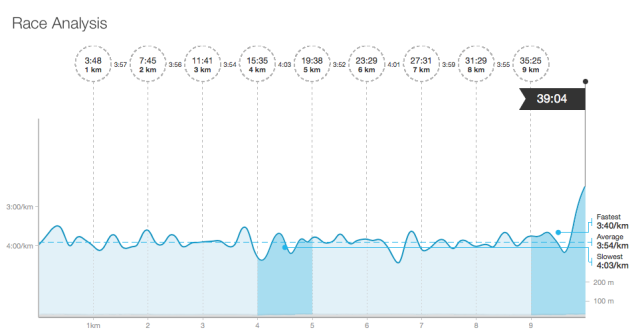 I then waited for a few other ELRs to finish, with Robert coming in at 40:57 (PB!). We also met Jamie Xavier (45:08) and Dominic Dragonetti (46:03) (who has the coolest surname, I think!). We had a chat for a while before seeing Fiona Day and congratulating Patrick Brown for finishing 3rd (34:48). Sania and I then made the short walk to Westfield through the Olympic Park, where we had some food before heading back home for a relaxing Saturday afternoon. All-in-all, a very nice event. Fast and flat course? CHECK! Shiny medal? CHECK! Goody bag? CHECK! Not at all bad for £18 (affiliated price). This is definitely going to be a regular in my race diary now. Stay tuned for the 2017 race report 🙂 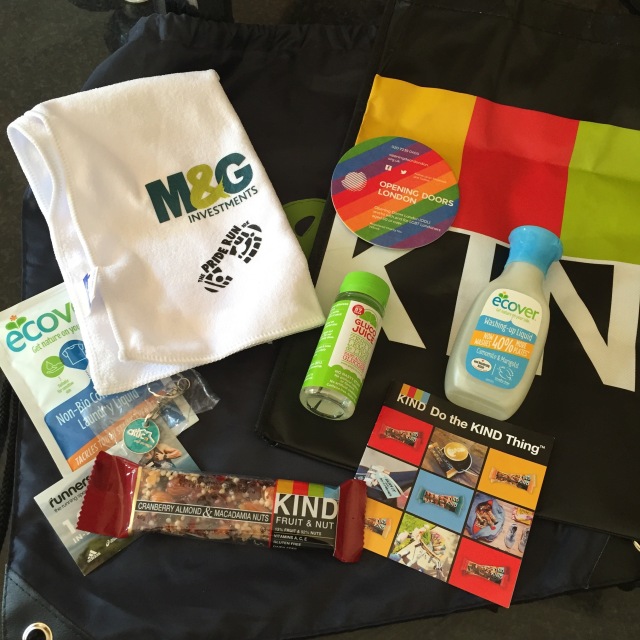