The Garmin Varia rearview radar is (in Garmin’s own words) the world’s “first cycling radar that warns of vehicles approaching from behind up to 140 metres”. Welcome to the 21st century of cycling gadgets! During this blog post, I will be (briefly) providing an overview of the main features of the Varia radar, my own reasons for purchase and what the benefits of such a light system are.

Brief overview
In simple terms, the Garmin Varia rearview radar is a backlight for your bike, that also acts as a radar to detect vehicles approaching from behind. Vehicle monitoring is achieved via a dedicated Varia head unit or by connecting and using a compatible Garmin Edge computer screen. The radar is available both as a standalone alone (ideal if you plan to use it with an Edge unit) or as a bundle with the radar and head unit. As I already have a Garmin Edge 1000, I went for the radar only, which is ideal as I prefer as less clutter on my bike’s cockpit as possible.

Included in the box is the Varia radar tail light, seat-post mount, universal set-post mount, USB charging cable and manuals. According to my scale, the unit itself weights in at 64.1 grams, which is very close to the weight advertised by Garmin of 63.5 grams. The unit is also fairly average for a tail light; 7.3cm x4.4cm x2.3cm. The is quite impressive considering that there is a sophisticated radar built in to detect motor vehicles from a distance behind.

The unit lights up in two main modes, solid and flashing. I have not had much hands-on time with the unit (yet!), but to summarise, the radar picks up vehicles approaching you from behind (up to 140 metres) and displays this information on your Garmin Edge screen. The unit can detect up to eight vehicles simultaneously, each represented by a dot on the right side of the Edge’s screen. As the vehicle gets closer to you, the dot will migrate up to the top of the screen, and once it has passed, will disappear. Furthermore, the radar light will warn approaching vehicles by flashing faster and brighter as the vehicle approaches.

Linking the unit to my Garmin Edge was a quick and simple process. You simply go to settings > devices > Varia, and then select the unit. You are now connected and each time you turn on the Edge unit, it will automatically connect the radar to your light network. The unit is charged via the included USB to micro-USB cable, and can be charged by any USB port. I am also a huge fan of the Garmin quarter turn mounting system. The radar is easily attached and secured to your seat post by the included seat post mount. To Garmin’s credit, they provide seat mount for either circular post or a curved one, so your bike will be catered for without the need to DIY or fiddle with your bike too much. 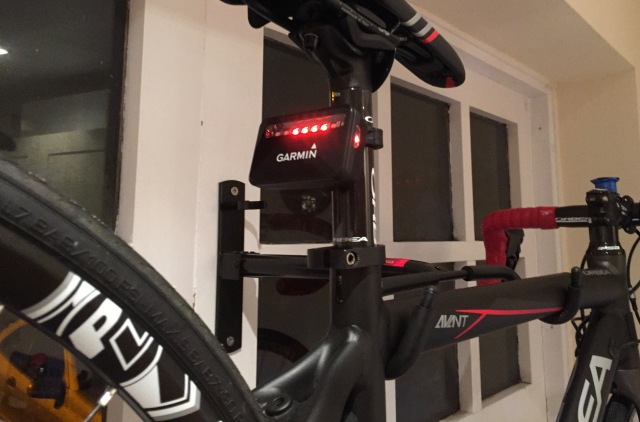 Reasons for purchase
I do a lot of commuting on my road bike, usually four to five times/week. For my weekend rides, I like to venture out onto the quiet country lanes in Essex. I feel that both of these environments offer unique challenges during bike rides, sufficient to justify the need to be aware of motorists behind you, as well as the requirement to alert them of your presence.

I recently purchased the Garmin Varia headlight, and being in the market for a quality rear light, it was a no-brainer to opt for the Varia radar, in no small part due to the seamless integration with the Varia headlight and Edge 1000. I feel that this is a complete system, with both front and rear lights being controlled by the Edge, as well as the benefit of vehicle detection.

Benefits of a radar system
Just from taking to a few cyclist friends, I am well aware that many are not convinced by the rearview radar. Yes, the price is steep, retailing for £160 for the unit alone (although around 10% cheaper from online retailers), but it does serve a very important function. As a relatively new cyclist, I find myself looking over my shoulder quite often, for example when I wish to move over into the road for a right turn. Now I will not blindly trust the integrity of the Varia, as it is still a machine and there is the chance that it may not pick-up a car resulting in a false-negative. For this reason I will still us caution and common sense along with the Varia but it is nice to have a system that I can depend on for potentially less hazardous scenarios.

A key point with the radar system is that is can detect vehicles from up to 140 metres behind, which may be well before you hear them. This is particularly important on windy days, where in my experience sound is dampened out, particularly when hurtling down country lanes at 50km/hr. Having a visual cue by a (very quick!) glance at your Edge screen is highly beneficial.

Final thoughts
As it is still early days with the Varia radar, I am yet to give it a through testing. In some ways, the radar is a perfect companion to your rides, and in my opinion is the best rearview light available on the market today, purely due to the ability to detect vehicles, alert you on their positions and simultaneously alert the vehicle to your presence. To this end, I would highly recommend the Varia system to anyone who is willing to invest into their road safety. If you spend any significant time cycling on the road, you owe it to yourself to be safe!

UPDATE 4/11/15: The Garmin Varia front light stays in an automatic standby mode, so when I turn on my Edge unit, the light switches on. Unfortunately, the Varia will not stay in this standby mode, and I have to manually switch it on each time. I have spoken to Garmin directly who have not come across this issue before, so it appears that I may have got a faulty unit. I have ordered a replacement and will update this post once it arrives.

UPDATE 6/11/15:  So the replacement radar is exhibiting the same issues as the first. Running the latest firmware. A little annoyed that it is not working as it should be (i.e. as the front light does). I envisioned just getting on my bike and turning on the Edge to have the entire light network turn-on, too. It is not that much of an inconvenience to press another button, but that’s missing the point. I would expect a £160 bike light to perform perfectly, without compromises, no matter how insignificant. Am highly thinking about returning both units now and just getting the normal Varia rear light for £52 (from Wiggle).