Since getting my first road bike in July earlier this year, I have been enjoying some quality time in my journey and evolution as a cyclist. Still being somewhat of a rookie to the whole cycling scene, I do feel that I am slowly getting the hang of both riding and the workings of a road bike. I mentioned in my first post after buying the Orbea Avant that I will be upgrading my bike as time goes on. Fast forward a mere 2 months, and quite a bit has changed!

My bike came fitted with a 9-speed Shimano Sora groupset, which was fine as a pure entry level system. Additionally, the stock wheels on the bike were first on my list to be replaced, as many had informed me that the most ‘bang for my buck’ in terms of performance enhancement on my bike would come from replacing the wheels.

Wheel upgrade
I initially got a set of DT Swiss wheels, which I really liked. Taking them to my local bike shop, I was as excited as a kid on Christmas! These wheels were supposed to serve me well during the London Duathlon, or so I hoped. I left the wheels with the local bike shop, who asked me to come back in an hour. After I went back the mechanic had managed to (badly) scratch the rear wheel! Long story short, they paid me in full for wheels (and kept them), meaning I had to miss out on new wheels for the Duathlon. The following week, I got a set of Pro Lite wheels from Wiggle and got these fitted (unfortunately the DT Swiss wheels were no longer available). The local bike shop also agreed to fit these without charge this time. 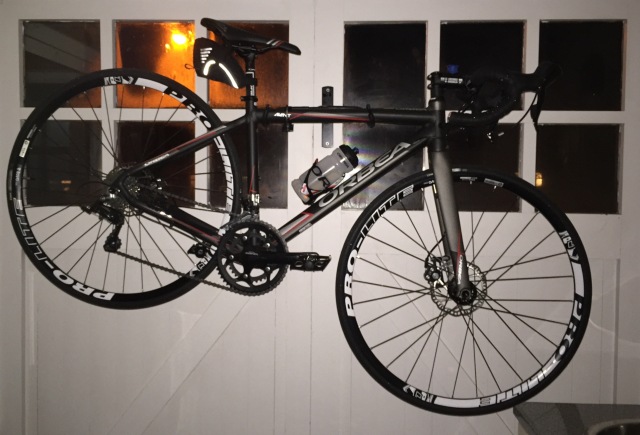 Okay, so in all honesty, I did not feel that the wheels made ‘that’ much of a difference. Sure the bike felt lighter, but the overall drive of the bike was still a little slow. I have built up leg strength through my running, but I feel that this is more sport specific, and my cycling still has a long way to come to equivocally match my running ability. Going uphill still seemed very slow. Not particularly tiring, but slow. And clunky! Furthermore, running a Sora group set on a bike with such nice wheels seemed a little redundant. To this end, I began to do a little research on what group set may help power me through inclines and give me a smoother ride. Enter, Shimano 105!

Groupset upgrade
As I was not changing my disc brakes, I purchased all the components individually, setting me back £280 for the front and rear derailers, chainset, shifters, 11-speed cassette, chain and some new Lizard Skin bar tape. I received many quotes for having the new groupset fitted, ranging from £60 to £150. I decided to get the work done from Cycle Surgery in Romford in the end. 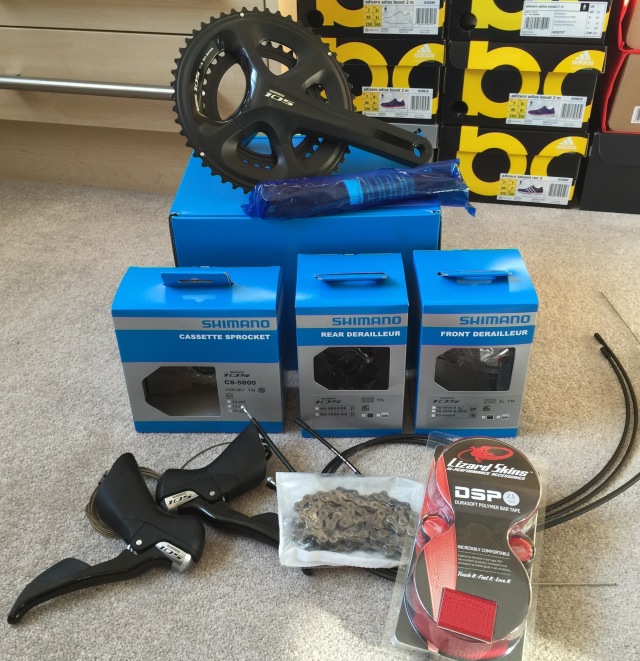 I took my bike and components there on as soon as they opened the following day and left the bike with them for a few hours before the called me and told me it was ready to collect! My excitement turned to some degree of disappointment when I saw that they had managed to scratch the chainset. This was most disappointing and their inclination to suggest that I may have ‘accidentally’ done this my self was most disturbing. I even showed them a picture taken previously (above) in mint condition, but it was more of a my word against theirs, kind of scenario. After some offers of a minor discount, they then told me that they will not charge me for the work carried out today, which came to £62. This provided some degree of compensation, and a minor paint job at home has managed to cover most of the damage, as seen in the pictures below. 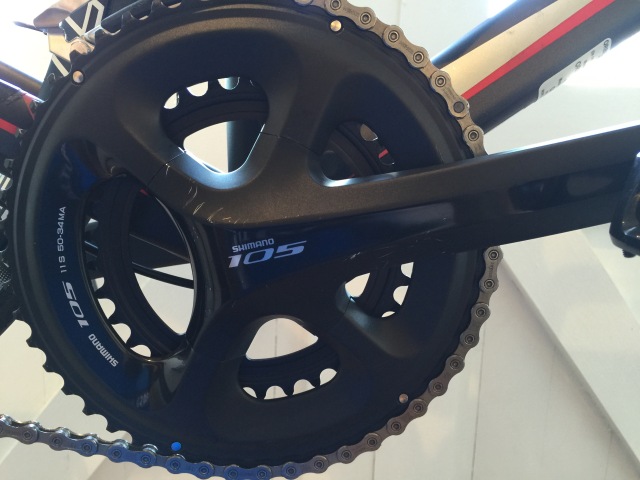 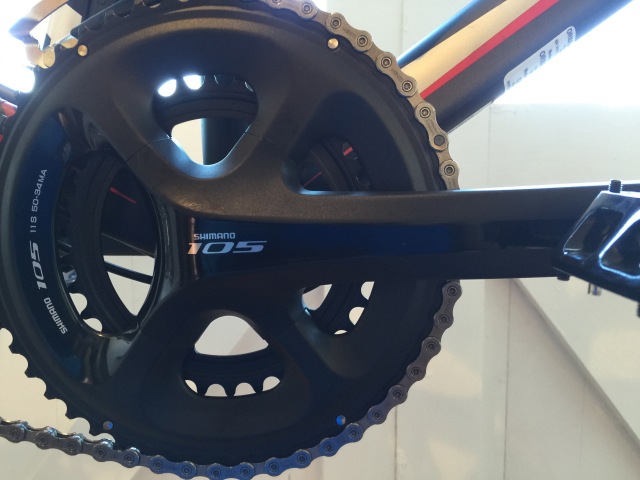 Thoughts on the Shimano 105 5800 groupset
I’d like to briefly touch on my thoughts with the Shimano 105 5800 groupset. Immediately after riding out from the workshop, I noticed a huge difference in the bike ride. Acceleration was notably improved from the very first pedal, and shifting was smoother and more refined. I did consider Ultegra, and the price difference between the two was ~£150. However, numerous online reviews all gave the 105 favourable reviews, with most stating that the difference between the two is very slight, and in some case, not noticeable at all. Furthermore, the Shimano ‘trickle down’ means that the 11-speed groupset (from 2014) shares technology from previous generations of Ultegra and Dura-ace. This can definitely be noted in the chainset, which is now the same shape as Ultegra and Dura. With an 11-speed cassette and buttery smooth shifting, 105 seems to give the best value for your money, and paying £260 for this upgrade from Sora is a very worthwhile investment. It was also great to see that the shifter cables are now neatly wrapped under the handle bars and not coming out from the shifters themselves, as with Sora. 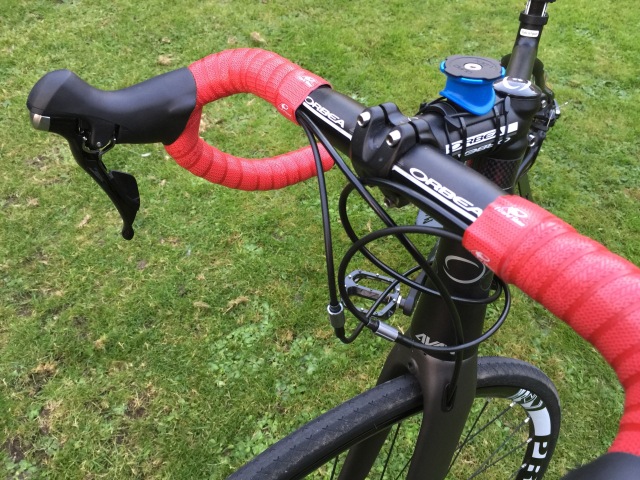 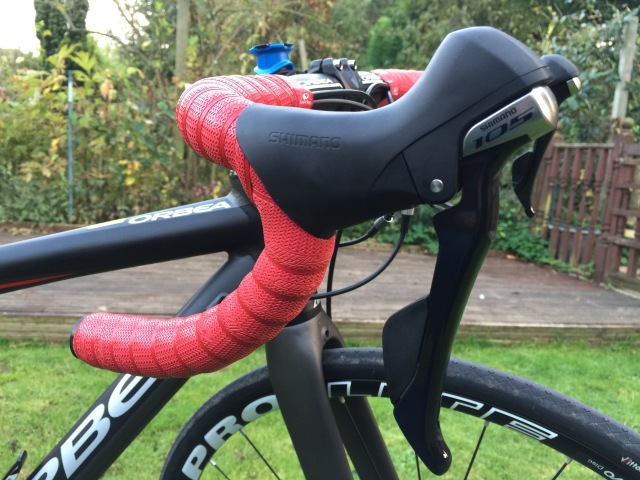 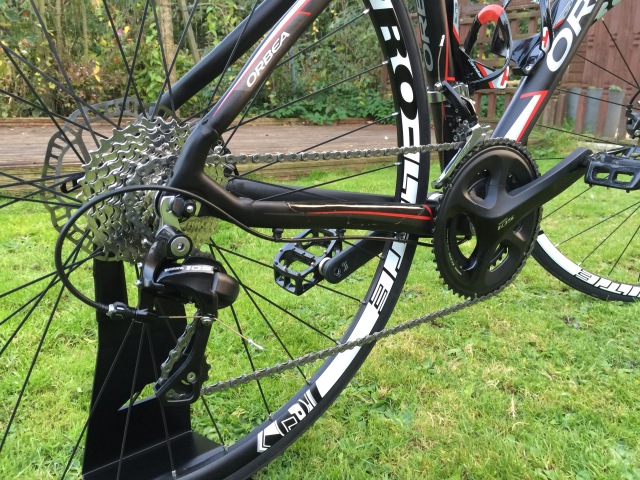 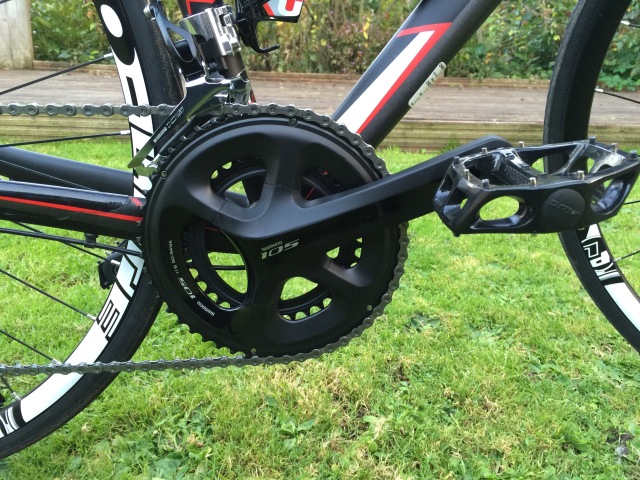 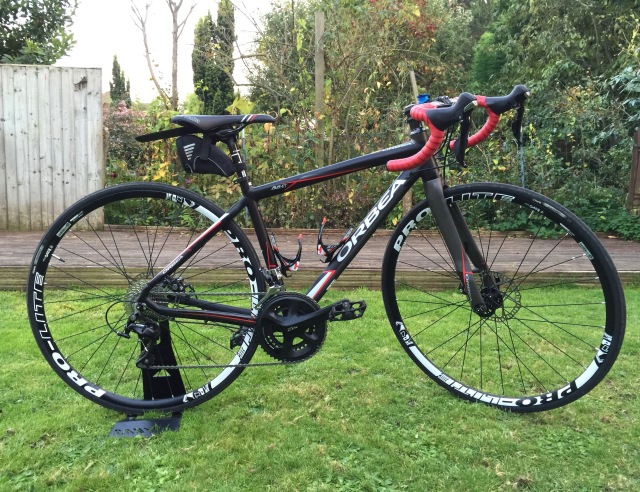 Final thoughts and future upgrades
Apart from the two fiascos with the local bike shop scuffing my first set of wheels and the Cycle Surgery incident, I am actually quite pleased with my bike now. It not only rides like a dream, but looks fantastic, too! The bike has now costed me just over £1300, which I think is a very good price for a road bike with a decent set of wheels and a full Shimano 105 groupset. Once thing which really looked great was the Lizard Skin red handle bar tape. I was actually so impressed with this that I will be doing a further blog post on this alone shortly.

So, what next? Future customisations to this bike will be relatively minor now. I think investing in a decent set of tyres will be worthwhile. It’s not like I haven’t tried to upgrade the tyres already. I have tried 3 different tyres, and all were unfortunately too large and rubbed against the rear rim of the bike frame. I also intend to equip it with a Garmin edge 1000 (including speed/cadence sensors) as well as a Garmin Varia radar/light system, as I do a fair amount of commuting on this bike. Reviews of these should follow soon! I think it’s time for a ride now… 🙂

One thought on “Upgrading my Orbea road bike”