This was my first time visiting Oxford. I decided to travel here the day before the Half Marathon and spent the night at a Premier Inn, located around 3km from the start line. Arriving on Saturday afternoon, I wanted to briefly look around Oxford, so decided to walk from the railway station to my hotel, around 8km away. The City Centre seemed nice enough and there was pretty much just main roads leading up to the business area in which my hotel was located.

After checking-in, I strolled out for another look about. Nothing much was to be found, apart from a retail park with a few large stores including a Tesco, M&S, Next and Boots. Contemplating what to do for dinner, I ended up in Burger King. I asked the staff if their chicken burgers were fried, to my surprise I found out they were! So that was news to me. I reluctantly ordered whichever burger had the least fat, apparently the chicken royale with orange juice, with no mayo or fries. Not the best dinner in the world, but I had a load of fruit waiting for me back in my room, which I brought along with me!

I woke up fairly early on race day. Breakfast consisted of an Innocent smoothie, pot of Mueller rice and ~750mL of water. I walked to the start-line from my hotel, some 30 minutes away. Fast-forward a couple of hours and I was standing at the start, just metres behind the start line. I was in the ‘white wave’ which meant I had put down a time of sub 1:30, although there were other coloured numbers in this area, and vice-versa.

The start was delayed by around 25 minutes, as I believe that there was a bus with some runners being transported to the start which had broken down. Not entirely sure on the details or accuracy of this information, however. After a few words of encouragement and praise from Sir Roger Bannister, we were finally off!

I took off quite fast, looking down at my GPS watch showing 16-17 km/h. I was beginning to think that I was perhaps going off too fast, but the course at the start was largely flat and I actually felt pretty good! Although initially a little cold running in shorts and a vest, I began to warm up rather quickly. This was actually one of the coolest autumn days of 2014 where the air had a fairly sharp bite.

The run was not very congested near the from to begin with, and began to thin out even more within the first 2km. By this point, it seemed that everyone around me had found their pace, and the run was now steady. The first half of the run was not very scenic. A huge promotion for the Oxford Half was the chance to run through the Mini Car Plant. I am one to appreciate history, but this was a little gimmicky and running through an industrial backyard is not my version of an incentive. The second half was more to my liking. Running alongside the river Thames, a little bit of park and some trail. Now ‘this’ was scenic! 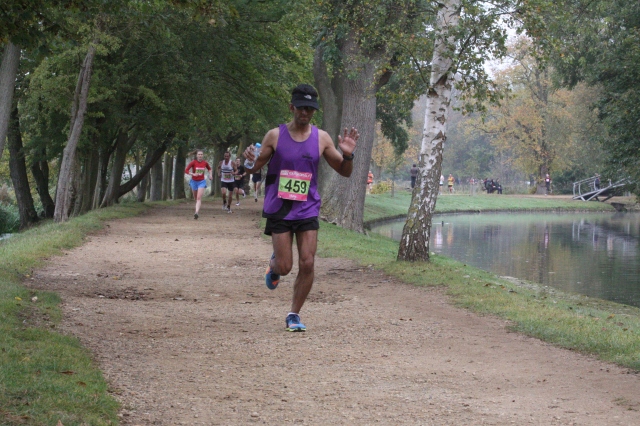 I maintained a fairly even pace,and began to increase my pace after 18km, and then again just before the finish. I was pleasantly surprised to be the only one crossing the finish line at my time, resulting in a solo stadium finish. This really was the highlight of the race for me and the crowd made that moment very special with their support and cheers. All-in-all, a fantastic event. I picked up my goody bag and medal just as I was reunited with my family. 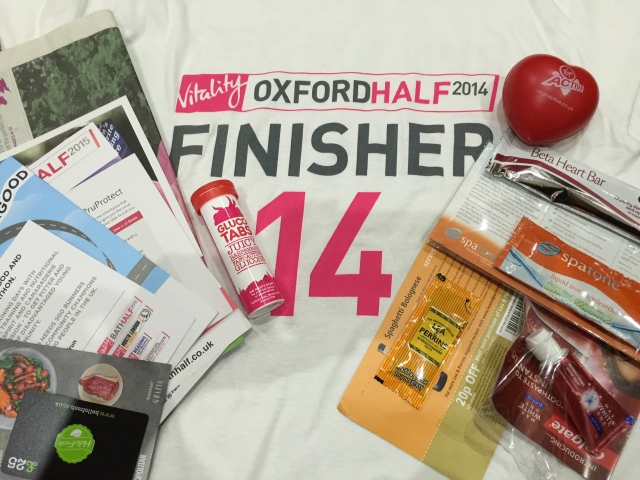 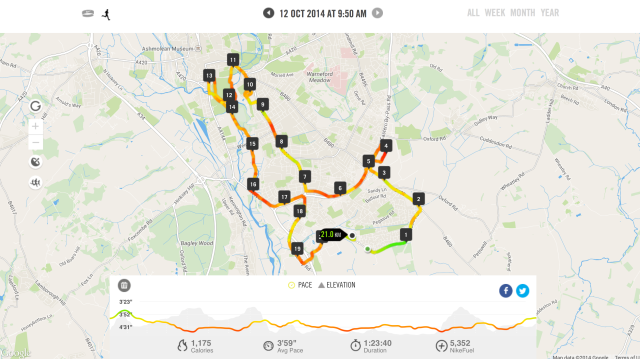 I should add that it was a little bit of a nightmare getting back to the city centre, as roads were still to be closed for some time. I ended up walking back to Oxford railway station in the end, some 12km after running the half marathon! A little trek and very long cool down, indeed!

One thought on “Oxford Half Marathon 2014 race report”